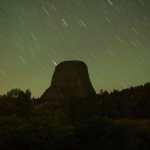 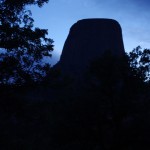 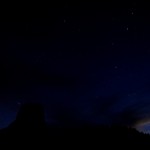 Last night was our Devil’s Tower night.  We stayed at the Devil’s Tower KOA, which is literally just outside the gate to the park.  We ate dinner in the shadow of the Tower.

The KOA shows “Close Encounters of the Third Kind” every night in the theater/restaurant – I was excited to see it again, and knew it would be the first time for the kids.  McGyver asked, “Won’t it be awkward if we haven’t seen Close Encounters I or II yet?”  They were actually pretty surprised when, in the middle of the movie, it was revealed that the alien ship wanted to make contact at Devil’s Tower.  When Richard Dreyfuss started sculpting the Tower out of mashed potatoes, the lights started going on in their heads…

After watching the movie, Tracie and I went for a walk – just sauntered past the (closed) guard post and walked in the dark toward the tower.  It was eerie… and dark.  So dark, that I vowed to return with my camera, my poodle, and Domo.  We spent the next four hour hours lying on our backs, watching satellites and counting shooting stars, taking long-exposure shots of the Tower, and the night sky which surrounded her.  These are our favorites.

In Love with the Tetons