Just when you think you’ve seen everything, your kids come up with something new. We hit the road over Labor Day weekend, taking a trip to central Minnesota for a weekend of camping.  Unlike our summer-long trip to the land of fire danger, we were able to have a couple of campfires, and we enjoyed the quintessential campfire food:  the s’more.

Traditionally, the s’more is created by roasting marshmallows over the fire, then sandwiching the marshmallow between two pieces of graham cracker with a piece of Hershey’s chocolate bar.  However, we had done some trailer cleaning after our summer trip, and had removed the Hershey bars. No chocolate.  We’ve made s’mores without chocolate before, but it’s just not the same.

Then the ever-resourceful kids thought of something – we did have chocolate!  Of course, it wasn’t in a bar, but a different format:  dark chocolate M&Ms.  So we started roasting marshmallows, and discovered a new and delicious way to make s’mores: 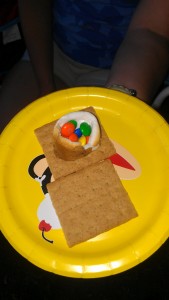 We ran out of Hershey bars, and moved to M&Ms for some awesome s’mores

Traveling with kids is awesome!  As you can see in the picture, after you’ve roasted the ‘mallow, just put it on a graham, and start poking the M&Ms right into the end.  It’s almost like the marshmallow was invented for this!  For bonus points, use coconut M&Ms, or peanut M&Ms and add some new flavors to an old campfire favorite.

Have your kids ever come up with a neat on-the-spot recipe idea?  Tell us more about it!