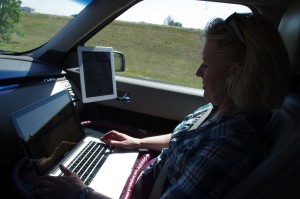 I’ve written before the fact that I became a virtual assistant primarily so I could work while traveling. And although I’ve worked successfully from hotels across the country and even while on a road trip to Washington DC, traveling the West has provided its own challenges (and we’ve been gone only a week)!

My virtual set up rested squarely on the fact that I would be able to receive a cell phone signal while we drove. I use an Android phone as a mobile hotspot and although we were assured by T-Mobile that we would have uninterrupted cell phone service, I discovered that having cell phone service is not the same as having a signal strong enough to run my internet. I worked around this by working offline as much as possible and placing documents into Dropbox, where they immediately updated when the signal got strong.

The next issue arrived as we left Central City. I had planned to work for three hours on the way to our next stop. We had hardly left the parking lot of the campground before my computer overheated and shut down – three times. Luckily, Colorado Springs had an Apple Store where I was able to check my laptop in for emergency service. I’d been having problems with my laptop for several months before we left on the trip and when I got to the Colorado Springs Apple Store, they were able to see what had been done previously and pick up where the other techs had left off. Although I was a bit annoyed that I had to take it in again, I do realize the fixing a computer can be a process. Each time I had taken it in, the geniuses had found something wrong and fixed it, it was just a matter of finding everything that was wrong. The people at the store were amazing. Much better than at my local store in Minnesota. In fact, over the few days we were in Colorado Springs, several people commented on how amazing the people are at that location. A new hard drive cable and bracket later, we’re back on the road and all seems to be going well.

WordPress – Cloning your blog into a subdirectory

It’s Been a Long Time On the Road

Working Virtually on the Road