The last 24 hours are that which adventures are made! Small ones, anyway.

After leaving Moab, Utah where we had dry camped (no water, no sewer) for three days, our road trip continued to Panguitch, Utah where we arrived dirty, smelly and ready to camp in luxury. We fully set up our site for five days of relaxing and taking day trips into Zion and Bryce to climb with friends. We don’t always fully unpack, especially if we won’t be somewhere for a long time, but this time we did. Chairs, lawn games, you name it, we had taken it out of the trailer. Anxious to remove the red sands of Dead Horse Point, I’d vacuumed the life out of Clark, had just finished all of the laundry and taken a trip into town to stock up on groceries when we realized the fridge was no longer working. Luckily, we’d bought an insurance policy for just such a reason.

Fast forward 24 hrs and we’re fully re-packed and headed to a neighboring town for service. When your fridge breaks in an RV, your whole house goes in for service. 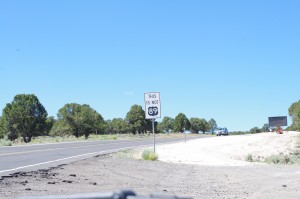 Utah DOT doesn't often give descriptive road signs. When they warn you that the road you're on is not the road you think you're on, it's a good idea to pay attention.

There were two ways to get to the town where we’d be able to get repairs. One was a two-lane steep, twisty road through the mountains, the other was a two-lane mountain pass. We opted for the mountain pass. Since it was only 35 miles away, we weren’t too worried. About halfway there, we realized we were almost out of gas. It turns out that the estimated fuel until empty isn’t quite as accurate when pulling a travel trailer through twisty turny mountain passes. Such is a road trip through the back country!

The first gas station we passed was completely out of fuel – no help there! We continued up the mountain and found the little town of Duck Creek. They had gas, but the gas station in this off-road vehicle town was set up for ATVs and was so small we had to unhook the trailer to get into it – a 20 minute gas stop. Such is a road trip through the back country!

We continued on up the mountain, some of the steepest grade yet and got to the top to find the road closed. But only on weekdays from 7am – 7pm. 😉 Notice about the closure came one block before the barricade, rather than at the bottom of mountain where it could have sent us a different direction. Such is a road trip through the back country!

Headed down the detour (which happened to be the road we had opted not to take), we continued on our merry way and passed through Cedar Breaks National Monument. 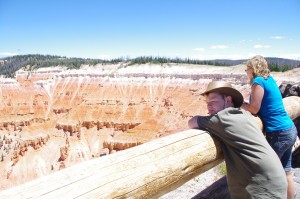 Didn’t know it existed, but it was pretty! Further down the road was Brian Head ski area. Complete with warnings of a 13% down grade. Bret took a deep breath, turned on the brake booster and continued on. A few miles further down the road was a sign that said, “trailers not recommended.” Huh? Now you tell us? Then we hit the road construction. Single lane switchbacks. No way to turn around. So I sat in the passenger seat, my right foot pressed into the bottom of the floor as hard as it would go while everyone else was making jokes and we sailed passed signs warning of open range and livestock on the road. Finally, we made it to the interstate where there were 40mph winds. Three hours after we left on our 35 mile journey, we arrived at our hotel to find a new fire had broken out just south of where we’d be staying. It was lucky we were staying there, because the police wouldn’t have let us go further. The interstate was closed. Such is a road trip through the back country during fire season!

Considering the news of our recently visited friends in Colorado Springs having to evacuate with their six children due to fire, and my sister’s cabin being underwater due to too much water in Big Sandy Lake in Minnesota, we consider our adventure pretty tame. So far anyway…