The past few days of our road trip found us in Colorado Springs and they were nothing short of amazing. In less than 24 hours, we toured the Air Force Academy, the Olympic Training Center and took the ride of a life time. 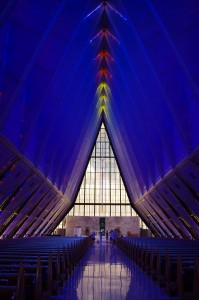 Touring the Air Force Academy was more than I had imagined. It is a beautiful and expansive campus featuring four of the loveliest chapels I’ve ever seen. All designed by the same architect and housed in the same building, we took a tour that showcased the Protestant, Catholic, Jewish and Buddhist chapels the cadets use while on campus. Although there are services on the weekends that are open to the public, we weren’t able to attend one while we were there. It was amazing to learn that the cadets at the Academy start learning to fly almost immediately and that part of their training includes glider flights and daily solo jumps from airplanes. The kids were impressed. If you go, make sure to take in the cadet information video shown at the top and bottom of each hour. It is an interesting glimpse into the life of the students there. I also recommend the chapel tour. Not only does it allow you to see the grounds, but the tour guide was fun and very knowledgeable.

At the Olympic Training Center, we were able to see the very facilities that some of the London athletes train at and live in during their training. We learned that athletes don’t have to train at the center and many future Olympians do not. There is a tradeoff to becoming a resident there: although your training costs, room, and board are all paid for at the state of the art facility, athletes who train there must give up the trainers they’ve worked with their entire lives to work with those employed by the US Olympic Team. We did see athletes, but were between training sessions, so didn’t see many. If you tour the Olympic Training Center, I recommend calling ahead to take the free tour during a training session.