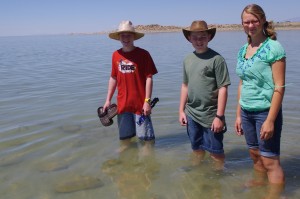 Salt Lake was like nothing we had ever expected. We pictured floating on our backs, foofie drinks in hand, in a lake where it is impossible to sink. What could be better! We loaded up on sunscreen and headed to the “beach” on Antelope Island.

We could see the beautiful blue water in the distance. As we pulled up into the parking lot, it was as if the tide had recently gone out. We could see huge expanses of dark sand, sea gulls darted about the parking lot. As we got closer, we noticed a funky smell and loud buzzing. No, it wasn’t the smell of salty sea water, it was the smell of billions of dying sea monkeys. The buzzing was the sound of billions of brine flies feasting upon their rotting corpses. 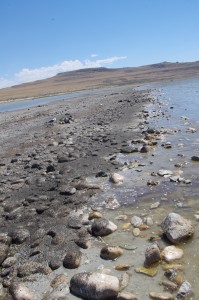 If you're sqeamish about flies, you might want to avoid the Antelope Island Beach at Great Salt Lake

It was a fascinating and horrifying at the same time. Domo commented, on the dark clouds of files, “It’s a good thing these aren’t biting flies or we’d be dead.” None the less, the kids decided they couldn’t pass up the opportunity to wade in this cesspoll of a science experiement.

So off wading we went. Past the Japanese tourists who gave up and ran back to the car leaving a misty trail of DEET in their wake. Past the couple with the Yorkie who narrowly escaped being carried off by the fly-generated breeze. But not as far as the German tourists who stripped down and jumped in, floating on their backs to pose for a snapshot. We wandered out until the hems of our shorts were wet, gazed at the mounains 80 miles distant, and called it good enough. We trekked back to the beach, protecting our airways from the invading masses of flies. 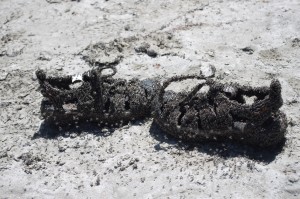 Unfortunately, we couldn’t save one soul from the fly onslaught – only his shoes remained. 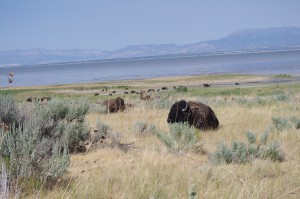 After showering and returning to the car, we turned our attention to the other star of Great Salt Lake’s Antelope Island – the bison herd. It didn’t take a very long drive on the Eastern shore before we came across the herd grazing in the salty grasses below a spring near the shore. We turned off our motor and took some snapshots, while Jock and the bison communicated in an ancient language of guttoral snorts.

Final verdict – Great Salt Lake was a really interesting place to visit — and the City was a fun city – but going for a swim is probably not a good idea.  Stick to dry land, and take in the sights, it’s a beautiful location.

Where Have We Been Lately? Sharing GPS Tracks