If you’re considering taking the internet with you on a road trip, do some research first.  You may be surprised to learn, for example, that T-Mobile just doesn’t cut it once you get west of the Mississippi River.

Tracie and I both have T-Mobile Android phones, purchased with the explicit belief that their “Nationwide 4G Network” coupled with the built-in wifi hotspot on the phone, would allow us to stay connected, no matter where we might find ourselves.  We even talked with the sales staff in the T-Mobile store about this.  They responded by going to the website and pulling up a map of some of the places we were going to be staying.  For example, look at Durango, CO and Jackson, WY: 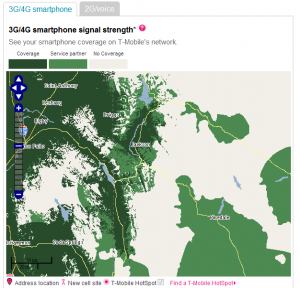 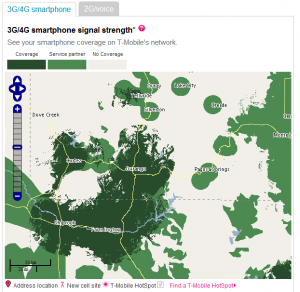 These are the maps we saw in the store – they look pretty good, with decent coverage in Jackson and in Durango.

Boy, were we ever surprised when we got to Durango and had spotty 2G coverage!  What happened?

We went back to the website and loaded up the maps, but this time zoomed in one level deeper, and realized the mistake we had made: 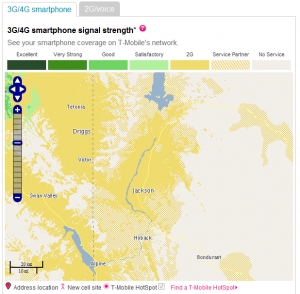 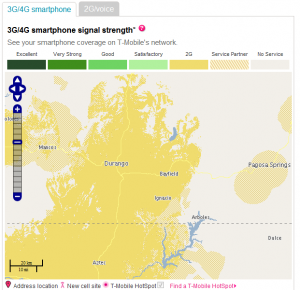 Yes, the coverage is “native” T-Mobile, but it’s all 2G in these cities.  This isn’t an anomoly; in the vast expanse between the Mississippi and the Pacific Ocean, there are very few oases of 4G coverage.  If you’re touring the West, and you’re on T-Mobile, you’re going to have to settle for 2G speeds.  Most of the time, we found it was better to drive around in a town in search of a free wifi (hotel parking lot) or to use the wifi service at most campgrounds.

The moral of the story:  If connectivity is key, dig a little deeper on the coverage maps…

Mayhem and Mishaps While On the Road

Where Have We Been Lately? Sharing GPS Tracks