I have this weird thing about packing for a trip.  I have a personal pride in not overpacking, in taking as little as possible while still having everything I need.  My husband tells a (true) story about a time we were packing for a Disney World trip where we would have a washing machine and dryer.  As I went through his suitcase (he likes me to double check that he didn’t miss anything), I grabbed a pair of underwear and handed them to him saying, “You’ll only need  five pair of underwear, I’ll be doing laundry on day four.”  He responded by throwing them back in the suitcase and saying, “It never hurts to have an extra pair.”

Yeah, I’m still trying to live that one down.

When we went to Australia for three weeks before we had kids, I made him share my razor so we wouldn’t have to take two.  And you’ve probably heard about how I make people in my family pack by color when we travel.  That’s actually a pretty good idea, by the way.

But I didn’t know what to pack for a trip to Hawaii.  Afterall, I have never been to Hawaii.  And this was a dream trip a long time in the planning.  And I didn’t want to NOT have the right stuff.  So, for the first time ever, I allowed myself to take one whole suitcase just for me.  And you know what?  I wore almost none of it.

Most people would probably think there’s no harm in that.  I mean, I was totally prepared for anything and it’s better to be safe than sorry, right?  But you know what?  Having so much stuff with me made me a little stressed out.  It was more to pack, more to unpack, more to carry, more to repack.  Just. More. Stuff.  And with the cost of checked bags today, who needs that?

So, I decided to take a photo of the clothing I actually wore for the 12 days we were gone so that I would remember next time we go to Hawaii or anywhere else for that matter.  And because I like to let others learn from my mistakes, I decided to post it here for you to see!

Because it was our anniversary, I brought one nice dress, the one on the left.  I picked up an awesome sundress that I love while at the Maui Swap Meet (the dress on the right). 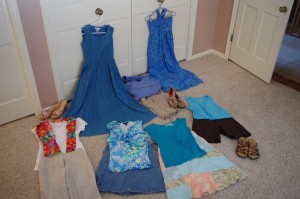 Between the two dresses is the outfit I bought for walking the beach if it got cool (it never did) or if we had gone to the top of Haleakala for sunrise (we didn’t).   I wound up wearing this just around the room like sweats.

The shorts and tank on the far right I wore when we did hike.

The other three outfits worked for everything else.  Skirts were perfect because most days I didn’t know where we would wind up and I was dressed for anything.  Their length was great for walking along the beach and they were cool enough for sightseeing.  My khaki pants fulfilled the same purpose but were a little less bright so I wore them in the evening.

Because we often have a washing machine and dryer in our room when we travel, I did a load of laundry here and there.  But, honestly, things didn’t even really get dirty. 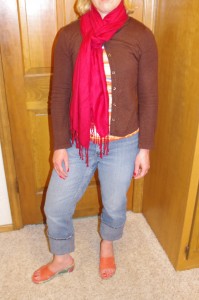 Of course I also had swimwear and a coverup.  And truth be told, I probably wore that more than anything else. For traveling, I wore jeans that worked left long (for going in and out of Minnesota ) or could be rolled with big cuffs for the rest of the trip, a sleeveless shirt, a cardigan and a sweater.  It turned out that this was the perfect choice as I had to take off and put on layers may times throughout the flights.  Once we arrived in Maui, however, I didn’t wear any of it until the return trip home.  Not even the light sweater.

So, if you like packing a lot of things to be sure you’ll be well prepared, go right ahead.  But you don’t need to.  Not for Hawaii.  I promise!

The Road Ends on Bates Avenue in Washington DC