I’ve had intention to keep the road trip reports coming, but frankly, we’ve had way too much fun (and too little internet connectivity) the past few days to make it possible, so today I’m playing catch up.  Before we left on our road trip, we had decided that we wanted to bicycle down Pike’s Peak.  I showed Tracie some pictures, and she thought it was a crazy idea.  “There’s no guard rails.  What prevents the kids from going off the edge of the mountain?”  Well, the answer, of course, is “nothing,” which didn’t make her feel any more comfortable about it.

After a bit of research, we found a great guide service in Colorado Springs, Challenge Unlimited.  They offered a cog railway up / bike down package, ending the day with lunch at Wines of Colorado.  According to the website, they hadn’t lost a biker in 22 years, so Tracie was convinced that we’d probably be safe. 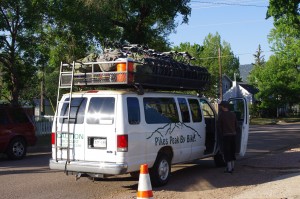 We started the day at 7:00 at their shop, where breakfast was waiting for us.  We shopped through their shirts and hats and waited for the rest of the riders to show up.  Good Morning America was on in the lobby, and the kids were transfixed at the sight of their first TV in about a week.  Ross loaded the bikes onto the van and gave us a ride to the Cog Railway station in Manitou Springs.

The ride up the Cog Railway was quite steep at times (over a 25% grade in some places) and the temp dropped about 25 degrees as we traveled up over 6000 feet in about an hour and a half. We passed by an old town halfway up (who knew?) and the home of two caretakers of the hydro plant at about 10,000 feet. Their mailbox is 17 miles away, and the nearest town is 60 miles away — or they could just jump on the Railway, I suppose. 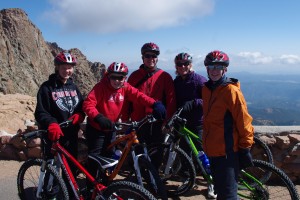 At the top, Domo grabbed a doughnut (of course!) before we started down. Ross and Harvey were there with our bikes and some warm gear. After a safety briefing, we were off. On the way down, we had Harvey in the lead bike, and Ross following behind in the van, to prevent traffic from tailing us. About every three to five minutes we would pull over and talk, take in scenery, take pictures, and let traffic pass. It was an exhilarating ride, with speeds sometimes reaching 30 or 40 miles per hour (if you wanted to go that fast) or staying down in the teens, if that was more comfortable. Ross and Harvey were excellent guides, and kept us all safe and informed all the way down.

All in all, it was a great way to take in the mountain.  There were a few uphill climbs on the way down, but when it was downhill, it was steep, winding downhill.  When we got down below the treeline, our guide Harvey told us that the section ahead was actually steeper and curvier than the trail at the top, and not to be deceived into relaxing on the brakes down there.  He was right – it was hard to believe that the bottom part was more dangerous, after having traveled through the upper sections.  I took this photo up at the top, showing about a dozen switchbacks at various levels coming down.  It was this that we faced at the top, and the lack of guard rails that made us into shy riders.  In retrospect, it was probably the wiser choice. 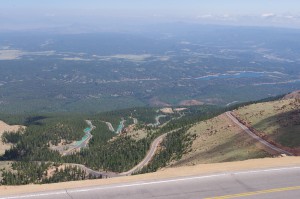 I would do this trip again in a heartbeat, though I’d probably not take the Cog Railway up again – it was interesting once, but probably won’t be novel a second time.  The trip down on a bike, however, should be exciting no matter how many times you make it.  Thanks again to the Challenge Unlimited team, you guys are the best, and I would absolutely take another trip down any mountain with you.

Why DO You Travel?