Living With the (In)Sanity on the Road Trip 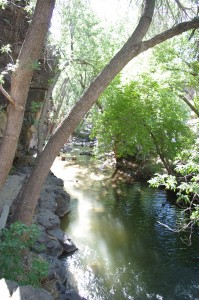 Crawdad Canyon - an awesome place to go climbing with kids

There’s one thing I didn’t count on for this road trip: the pervasive insanity of living on the road.  The trying and trying again of the same old things, in the hope that I’d get a different result this time.  In this case, it was living with the constant heat, trying to find fun activities in 100 degrees and constant sun.  Being warm had started to lose its appeal.

In Utah, things changed.  We were ready for something radically different, so we split up – twice – on some epic adventures with the Keilty family.  Both involved some cooler temps, and plenty of water.

First, on Thursday, the kids and I ventured out to Veyo, Utah to do some climbing with Josh and his boys.  This isn’t ordinary Utah climbing, no — it’s climbing in a narrow canyon, with a rushing stream, an awesome pool, and a snack bar.  It’s Crawdad Canyon.  I can’t imagine a nicer place to go climbing with kids.

Josh and I set up a couple of routes (conveniently labeled with bronze plaques as 5.8 and 5.9 difficulty) and then took turns belaying the kids as they took their shot at the wall.  When not climbing, they could be found cooling off – or building dams – in the creek below.  This was the most interesting climbing experience I’d ever had.

We got hot mid-day, and took a dip in the pool.  And ordered malts.  Then went back to climbing.  Really, it was a thing of beauty.

A couple of the kids really surprised us with their tanacity (or maybe stubbornness) in completing climbs.  McGyver finished a 5.9 lead climb that Josh wasn’t able to top out, and Natasha went from absolute beginner to rock monkey(and loved it!) in one afternoon.  What fun! 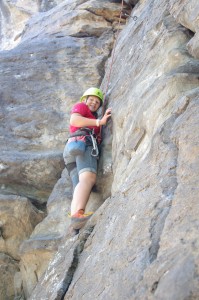 The camp sites were full at Crawdad Canyon, so we left at dinner time and headed up to Barker Dam, just up the mountain.  While Josh and I started preparing the Mac & Cheese, the kids retreated to the reservoir to catch some crayfish for dinner.  We were not disappointed, and had a feast of freshwater crustaceans, M&C, and S’Mores for dinner. 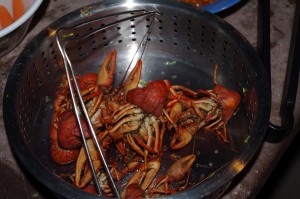 The next day, we turned the tables all the way ’round and packed up for an afternoon at the Virgin Narrows  in Zion National Park.

This was one of the items on Tracie’s wish list – and we were all more than willing to play along (it was on my bucket list, also.)

I cannot emphasize enough how amazing this experience is – if you’re in the neighborhood of Zion, put this experience on your list, and see if you can devote a full day to it. 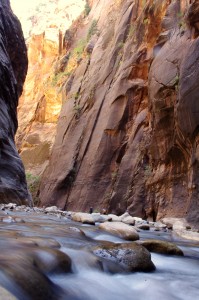 It was very interesting, starting at the Zion park entrance, much like an entry into Disney World – then boarding a shuttle bus and riding 40 minutes up the canyon to the last stop… stepping out into throngs of people, and heading upriver.

The further we went, the fewer people we saw – until eventually, the canyon had gotten narrow enough, and the afternoon late enough, that there were few other trekkers with us on the adventure.  We stopped to take some pictures, and snarf down some energy bars, before we turned back downstream  to return to civilization.

Some day, I’m going to do that trip in the other direction – starting at the surface of the plateau, and journeying down the Virgin into the canyon, and out via the park entrance.  Until then, I’ll have to be satisfied knowing that my kids and I trekked up a couple miles of the canyon, got some interesting photos, and had an enormously good time doing it. 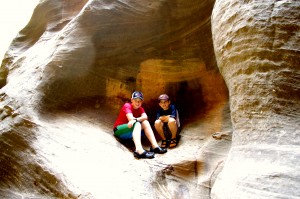 Shakedown Trip – The Trailer with a Revolving Door