As if we didn’t have enough opportunities for great food on Oahu, we went on a food tour in Honolulu, the Hole in the Wall Tour by Hawaii Food Tours.  What a blast!  Over the course of five hours, Matthew and Keira drove us around Honolulu and treated us to some of the best street food we’ve ever had.

First stop (for breakfast?) was a manapua from Royal Kitchen in Chinatown.  Traditionally these little buns are done steamed with Chinese sweet roast pork called char siu.  At Royal Kitchen they do a baked version with a choice of a bunch of other fillings.  Tracie had the kalua pork, while I opted for the Portuguese sausage.  They were both great, but I liked her Kalua pork better. 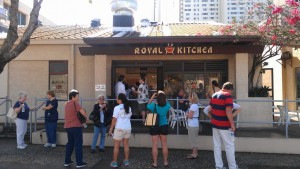 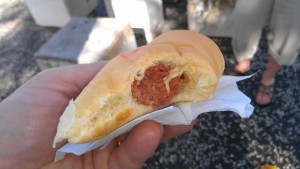 Next stop (for breakfast dessert?) was the Liliha Bakery, famous for their Coco Puffs.  These were heavenly little balls of cream puff with a dense, decadent Chantilly frosting.  The Liliha Bakery itself was a hoot, with some items in the display case that we’d never seen before, like these hot dog pastries.

True story: the definition of the word “Liliha” in Hawaiian: To be nauseated by rich and fatty foods. 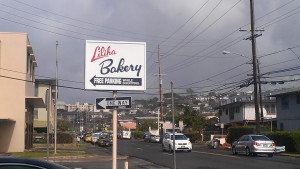 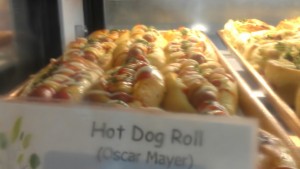 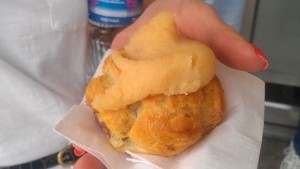 Finishing up dessert, we headed back down the hill for an hour and a half in the heart of Chinatown.  The first stop was the Ying Leong Look Funn noodle factory, where we waltzed right into the kitchen and watched them make rice noodles.  This unassuming little shop turns out thousands of pounds of rice noodles each day – all made by hand.  These noodle sheets are then sent off to local restaurants that make fresh chow fun (noodle) dishes.  We were treated to some noodles, fresh off the rack, prepared stir fry with Korean BBQ chicken. 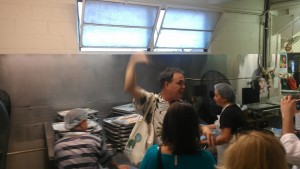 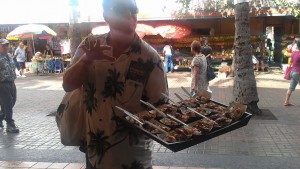 Up next – exotic fruits.  We tasted the longan (Dragon’s Eye) and rambutan (Big Red Hairy Ball) – both related to the lychee in flavor. 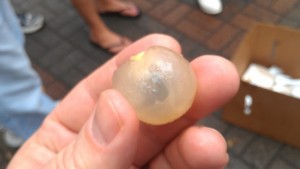 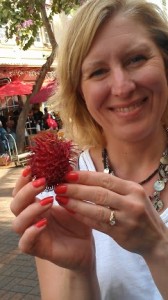 This was followed very quickly by the “local boy plate” featuring Spam musubi (kind of like a Spam maki roll) and fresh pineapple with and without li hing powder. 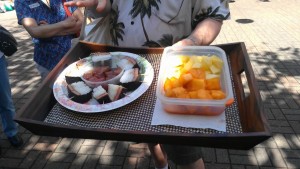 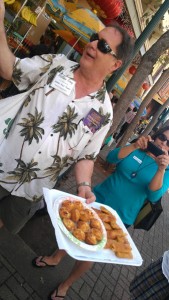 Without a moment to rest, Keira showed up with coconut tarts and fried apple banana lumpia.  The food was arriving just about as fast as we could take it all in.  Just when we were starting to feel full, Keira whipped out some cocktails, a lychee vodka pineapple smoothie which Matt called the “Keira Cocktail.”  Okole Maluna!

Time for a change of scenery – we walked a couple of blocks to the Char Siu House and tried pork two ways: char sui (Chinese sweet boneless) and the 5 layers of heaven roast pork, with crackling crunchy skin.  This was the high point of the tour for me.  Yum!  Meat! 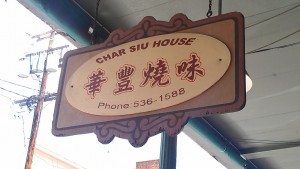 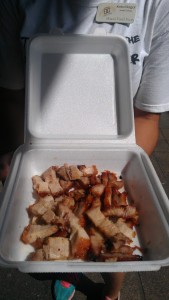 Now, time for some digestion.  We got back in the van for a 20-minute tour about the town.  We saw the Iolani Royal Palace and several churches, and got a bit of a history lesson from Matt as we traveled.

Our final stop was the legendary Leonard’s for malasadas, the Portuguese doughnut.  These were served fresh and warm from the fryer, and were spongy and soft, unlike traditional “American” doughnuts. 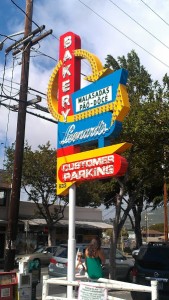 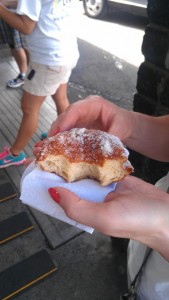 This tour really surprised me, not only for the diversity and the quality of the foods that Matt and Keira found for us, but particularly for the service and attention our guides gave us.  For five hours, we had a party all over Honolulu, while Matt and Keira stayed a step ahead of our every need.  We had a lot of fun, and it was obvious that they were enjoying us having fun as well. 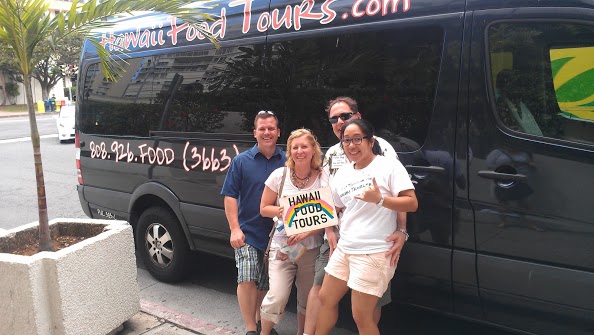 They offer several tours in addition to the Hole in the Wall tour, if you prefer traditional restaurant fare, or even fine dining.  There are several teams of tour guides – I would suggest you call up and see which day Matt and Keira are leading tours.  They were that good!

If you take one of their other tours, please let us know how it went – we’d love to hear about your adventures with Matt and Keira!

13 Tips for Airline Travel with Kids

And on Thursday, It’s Yodeling…

Minnesota is NOT a Flyover State