While camping in Moab, we experienced temps over 110 degrees, and it showed us some limits in our travel trailer.  One of the most alarming problems we had was a delamination of the vinyl wallpaper from the wall wherever we had an adhesive hook attached.

We learned that day to either NOT use adhesive hooks for organization, or to be careful not to use them in any above-normal temps.  I’ll be honest, this absolutely broke Tracie’s heart to see these bubbles all over our walls and in the bathroom – really, anwhere we had anything hanging from a wall hook.  I had some success in getting the wallpaper to re-adhere by simply removing the adhesive hook, and then rubbing really hard.  But, by the time we arrived home, the bubbles were back, even though we had not put the hooks back up.

Fast forward two months, and we’re doing our winterization.  The bubbles are staring me in the face, and I had an idea.  This completely solved the issue, the bubbles are now GONE!

Step 1:  Take a sharp knife and score a straight line all the way across the bubble.  DON’T WORRY!  You’re making an escape for the trapped air, opening a large hole into which you’ll apply heat later, and making a tidy seam that will disappear later. 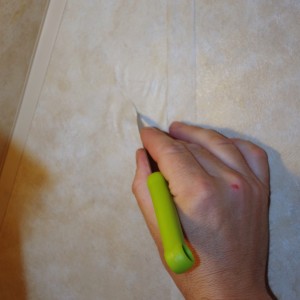 Step 2:  Using the edge of the knife, or something more blunt if you’re nervous, work the bubbled paper away from the wall panel.  You want the part that’s separated to be clearly separated, and the vinyl that’s still adhered to be very adhered. 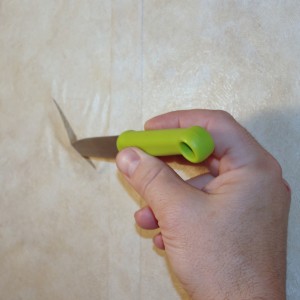 Step 3:  Apply heat!  Now that it’s so well separated, a hairdryer will make it puff up like a balloon.  Keep this up for several minutes on LOW HEAT.  You want everything thoroughly heated (even a bit soft) but you don’t want to actually melt anything. 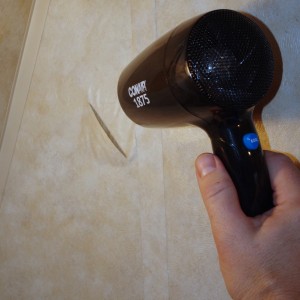 Step 4:  Using the back side of a spoon, with the heat still on, start working from the outside in towards the new seam.  You should be able to get the vinyl to stick quite well, and the final seam should be just as straight as when you cut it.  When you’re finished with one side, turn around and do the other, again working toward the now finished center seam. 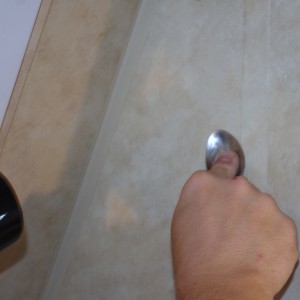 Step 5:  Step back and enjoy!  The bubble is gone, and this time, it’s not coming back. 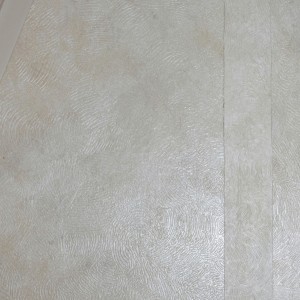 Can you see where the cut/seam line in the last photo? Neither could Tracie.