Yesterday we crossed over into a new realm of parenting.  We sent our three (young) teenagers alone and unaccompanied on a flight to see their grandparents in Phoenix.  They were officially unaccompanied minors for the first time in their lives.  Even though the kids have flown with us several times in the past, our love for family road trips means that they haven’t flown in quite a few years.

The whole thing went quite well.  I had imagined they might be a bit nervous at the prospect of navigating themselves through the airport but instead they acted as though they have been traveling alone all of their lives.

Rumor has it that not only did they land safely at their destination, where grandma and grandpa met them with a fully decorated vehicle that said, “The Party is HERE!”  but that they also didn’t have any disagreements to speak of while in transit.  In short, they can’t wait to do this again. 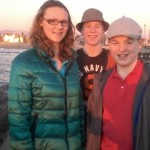