My family has owned Disney Vacation Club (DVC) points for several years.  We’ve taken many terrific family vacations to various places around the country by using our membership to the max.

When Disney first announced they were building Aulani, a resort in Hawaii, we realized the opening would coincide nicely with our 20th anniversary.  And this time, it wouldn’t be a family vacation, just my husband and I. 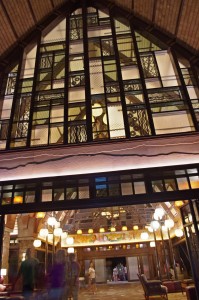 Aulani – what a fantastic resort!

From the moment we stepped out of our car it was clear this is a Disney resort unlike any other.  Perhaps it was the lack of theme parks nearby or the casual culture of Hawaii in general, but there was a definite lack of the frantic excitement we’ve experienced when checking into other DVC resorts.  Here, things were calm, cast members were welcoming and it felt as though our vacation started the minute we were handed glasses of fruit infused water and presented with leis.  We were asked our name while still outside sipping our water, and within seconds were presented with our keys and check in documents.  I had checked on line before we arrived and had made no special requests.

After our bags had been loaded onto a baggage cart, we were given a tour of the lobby by an Aulani hostess.  The open air lobby was dramatic and beautiful with breezes moving freely throughout the space.  Unlike our experience at other hotels, at Aulani your baggage stays with you right up until the time you are shown into your room.  I really appreciated that since we’ve had long delays at other resorts while we wait for our luggage to meet us in the room.

We stayed in the Ewa Tower, it is on the left side of the lobby as you walk in from the driveway.  While we were there, the other tower was closed due to construction being done on the grounds of that side of the resort.

Our room was on the 16th floor and was classified as ocean view.  Not only did we have a view of the ocean, where we could watch whales from our balcony, we also had a sweeping view of the entire Waikolohe Valley Pool area http://resorts.disney.go.com/aulani-hawaii-resort/activities-amenities/pools-beach/pools/ .  It was a fantastic location.

The room was absolutely clean and more richly decorated than many other DVCs that we’ve stayed at.  Native Hawaiian art adorned the walls and the rooms were decorated in warm earth tones.  In addition to the regular DVC appliances and appointments, Aulani also included a rice steamer and set of chopsticks for six.  This is due to the large Asian population who also vacation here.

Our one-bedroom villa had two separate balconies, one off of the living room, and one off our master bedroom.  Depending on the sun’s location, we used both regularly.   In the living room, a small Murphy bed pulls out sideways from the entertainment center.  This allows the one-bedroom unit to sleep five people, although the Murphy bed would definitely be for a child.

We also noticed that Disney moved away from the traditional corner, oversized tub.  Instead there was a nice soaking tub.  The shower was amazing with both an overhead rain shower and a removable, adjustable showerhead.

Aulani has several different restaurants, and although we had intended to try them all, a stomach bug meant we had three days where we ate almost nothing at all.  We also did a lot of cooking in our room.  Since it was just the two of us and the fresh fruits and vegetables were so appetizing to us in the dead of winter, we found little need to venture out to eat. 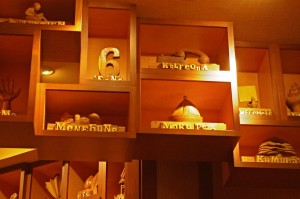 The ‘Olelo Room  was my favorite place to hang out for cocktails and appetizers.  Although the appetizer list was short, everything we ordered was fresh and tasty.  The restaurant is beautifully decorated with wooden carvings of everyday images along with their corresponding Hawaiian word.  In the evenings, live music and a cast of servers who all speak native Hawaiian make this a complete immersion into the Hawaiian experience.  The ‘Olelo Room is just outside Makahiki the restaurant that hosts buffets at breakfast and dinner.  We didn’t eat there, but the dining room was very pretty.  Both restaurants can be opened to the outdoors.

We also tried Off the Hook for drinks and appetizers one night, but my stomach wasn’t quite ready for the food there and we boxed everything up and took it back to the room to eat later.  We had the cheese plate, thinking that would be mild enough for me, and it was very good.  In general, Off the Hook is a lounge area where you can wait for your table at ‘Ama ‘Ama and I didn’t care for the large screen tvs that were playing sports.  It seemed odd to be watching tv in what appears to be a large hut overlooking the pool.

‘Ama ‘Ama also suffered from our lack of appetite.  Although the menu looked good and we thought we’d be hungry, when we sat down for our special 20th anniversary dinner, we quickly realized that we wouldn’t be able to eat much.  Unfortunately, once our waiter clued into the fact we weren’t going to be his cash cow for the night, we were virtually ignored.  He had mentioned our anniversary when we sat down and I knew that other people had received free dessert while celebrating an anniversary while at the resort, but honestly, we knew we wouldn’t be able to eat it anyway.  It’s entirely possible that he saw we weren’t eating much and decided asking us about dessert was silly, but it bothered me that our service level drastically declined after he realized we’d be sticking with appetizers and salads.

Things we loved about Aulani:

The beach was great.  On more than one day we spent the entire day sitting in lounge chairs with an umbrella.  It was the perfect way to recover from the mild case of the flu we were experiencing.  We ordered food one day from the beachside waitress and it was hot, fresh and delicious.

Community Hall – even though we didn’t have our kids with us, we did find ourselves walking down to get movies once or twice (remember, we weren’t feeling well).  Unlike Community Halls at other resorts, this one always had attentive staff and crafts being actively worked on by someone.

The lazy river.  Even though we tended to stay away from the pool because of the large numbers of kids (besides, when you have an ocean, why sit by a pool?), we did go down the lazy river a few times. It was relaxing and fun.  And it was absolutely breathtaking at night.

The atmosphere.  This resort is Disney’s shining star, hands down.  Prior to arriving at Aulani, we’d been at the Fairmont on Maui, a very exclusive and beautiful resort.  The staff couldn’t hold a candle to the cast members at Aulani and our Fairmont room was really stinky.  At Aulani everyone was not only very friendly, they went out of the way to make sure everything in their power was done to ensure the perfect trip.

Starilight Hui.  Bret and I knew that we didn’t want to spend the money on a Luau, especially since the locals don’t recommend them because the food isn’t usually very good.  But we were curious about Hawaiian dance and the ceremony behind it.  Starlight Hui was perfect.  We didn’t go to the early part of the show when kids participate and we left before the dance party.  The dancing and show portion, lead by Uncle was very entertaining and well done.  We were provided with mats to sit on.  The show lasted about ½ hour.

The décor-Aulani is beautiful.  It is relaxing and peaceful and wonderful.

The Spa – we are not spa people.  We’ve never had spa services before and generally aren’t into pampering ourselves, but since our dining plans had sort of gone sour because of illness, we decided to pamper ourselves with spa treatments.  WE LOVED THE SPA!  Although the spa cast members advise arriving an hour early, we wished we’d been there even longer to enjoy all there was to offer.

Things we didn’t care for at Aulani

Aside from the spa, there are no adult only areas at Aulani.  I realize this is a DVC property and that many of the people traveling there will have kids.  I really do get that.  We have three ourselves.  But when you consider that Hawaii is also a destination for adults in a way that the parks typically aren’t thought to be, it would only make sense that there are a few places reserved for adults only.  Our biggest issue was the hot tub.  Aulani has a beautiful two-level infinity tub that overlooks the beach and is the perfect place for viewing the sunset.  Instead, it was usually filled to capacity with kids jumping from one level to the next.  I do not believe kids belong in any hot tub at any time for any reason, it isn’t safe and it isn’t necessary.  Kids do not need to be everywhere adults are.  There are, however, two hot tubs in the Waikolohe Valley Pool and if it is absolutely necessary for kids to be in one, I’d suggest they are limited to the less popular one further away from the beach.

That was it.  Only one thing we thought could be improved. All in all, a pretty amazing concept when you consider this is a hotel that hasn’t even fully opened yet.  Yes, there was construction going on, but it honestly did not affect us in the least.  We did see walls up around areas where workmen were working, but they were tastefully painted and not in our way.  It makes me excited that the next time we come there will be even more for us to enjoy.

I was honestly surprised at how much I enjoyed our trip to Hawaii and to Aulani in particular.  A die-hard Disney fan, I never thought I’s find a way I wanted to use my points more than by going to the parks, now I want to spend all of our points in Hawaii!  A good problem to have! 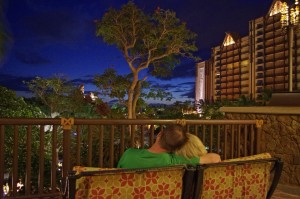