How Lewis Got His Name 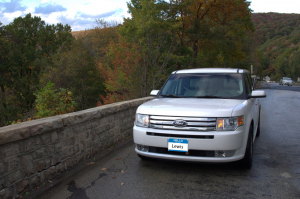 When we first got the Flex, I called it my truck. I’d always had a truck and the Flex certainly didn’t seem like car. Besides, it was easier to distinguish between our two vehicles if we called one a truck even if it wasn’t.

But in the end, no one was fooled. In Minnesota, well probably in anywhere, a truck has clearance that allows for snow drifts and big puddles and lots of other stuff you want to drive over. The Flex didn’t have that.