When we chose the Ford Flex as our new car it was because we were in the market for a new vehicle.  While deciding what we wanted, it only made sense that we would buy something we could tow a trailer with, since we knew we wanted to take an extended trip.  Read more about our roadtrip vehicle decision making process.

Choosing our trailer, Clark, was a much different story.  We didn’t NEED a trailer.  We certainly didn’t need a trailer in August of 2011.  Granted, Bret had applied for the time off with his employer for our big trip, and we had the dates on our calendar, but we knew we had the entire winter to look for just the right fit for us.  We also knew that in Minnesota, there are several opportunities to find a lot of different trailer styles and manufacturers under one roof during camping shows held throughout the winter.

But, we had to start somewhere.  And it happened to be at Hilltop Trailer Sales in Fridley, Minnesota.

When we first started looking, we were limited primarily by the Flex’s tow limit of 4000 lbs.  That left us with several options: tent, pop-up trailer (also called tent trailers), hard-side trailer, or a hybrid, expandable trailer.

Given the fact that I’d done my time roughing it and going to the bathroom in the woods, I added indoor bathroom to my list of requirements.  That brought us to either a hard-side trailer or a hybrid.

This debate went on for a few weeks.   As we talked to people, we heard rumors that hybrids were: hard to cool, hard to heat, leaked in the rain, were difficult to set up, and wouldn’t be allowed in some National Park campgrounds.  These things made a hard side look like a winner, except that we could get much more space out of hybrid since the expandable ends made it much lighter.  We talked to a lot of people, and did extensive research.  What we found was, except for the part about not being allowed in some National Park campgrounds, the rumors about expandables were false.  (Hybrid trailers are not allowed in camping areas where bears might be an issue as the canvas sides don’t offer adequate protection).

After traveling in a hybrid for six weeks in the heat of the summer everywhere from Southern Utah to 12,000 feet in Colorado, I can attest first hand to the fact that the hybrids both cool and heat very effectively.  They are also quite snug in the rain and take a matter of minutes to set up. 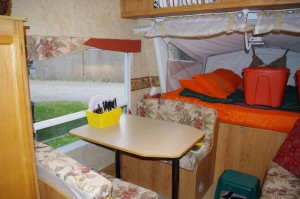 You can see how a expandable bed takes up a lot of wall space. Believe me, the orange isn’t nearly as hideous in person! 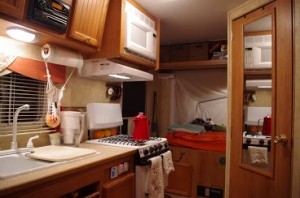 Next we had to consider floor plans.  This seems simple, but since we would be living in our trailer full time for six weeks, there were certain things I really thought over.  The first was: two expandables or three? Having three would mean that everyone would have a designated sleeping space, and no one would have to sleep on a couch in our general living space.  I found, however, that having three wall cut-outs for beds meant a big decrease in storage space.  There was almost no wall space.  That was a big disadvantage.  I also knew that in many of the places we camped, the boys would want to set up their tent, which would leave our daughter with one big bed to herself.  If we had three expandables and the boys wanted to sleep outside, there would be a huge waste of space.

There were also dinette configurations to consider.  In my head, I thought I wanted a u-shaped dinette so we could all fit comfortably around it for dinner.  Our salesman pointed out, however, that while camping, we’d most likely be eating outside and the space would go unused.  Additionally, the only way to fit the u-shaped dinette in to the small space was to place it directly under the queen size bed expandable (read, my bed), which meant I’d have to crawl over a table each time I climbed in and out of bed.

I also wanted a full stove/oven combo, not just a stove top and microwave; and a fridge and separate freezer.  Unlike designing a home (or even a high-end motorhome), where customization is possible, making these decisions completely dictated the type of rig we’d end up buying.  An oven/stove combo meant we’d have to upgrade to the next options package.  That package also included the fridge/freezer I wanted, but it meant, we’d have to buy used, since new trailers with those options were more than we wanted to spend.

I have to say, both the oven and the separate freezer were things I was very glad to have.  Because we traveled during one of the worst droughts in American history, we were only able to have an open flame or use a grill two or three times all summer.  That oven saved me on more than one occasion!

Our final criterion was in the bathroom.  When looking at baths, there weren’t a lot of choices.  One choice we did have was with the shower.  Some baths have what they call a “tub.”  What it is really, is shower stall with very short sides on it, making a teeny tiny tub about 18” square.  Now, I knew that no one in our family would be taking a bath in that small space, but I also knew that we would likely back up our gray water on more than one occasion and that the first place it would start to back up would be in the shower.  I wanted to be sure that the water was contained rather than running throughout the trailer.  The tub also makes for a handy storage area for bulky items that are stored outside when you arrive at your destination and helps to keep the trailer a lot drier overall if you do decide to take a shower.  For the record, we only used the shower once during our big trip and that was at the Great Sand Dunes where there were no shower houses.

Deciding on these amenities was not a quick process.   We toured many dealerships, picked up a lot of catalogs and surfed a lot of websites.  We let our favorite dealer know what we were looking for.  Since we wanted to buy used, we were prepared for a long wait for exactly what we wanted. 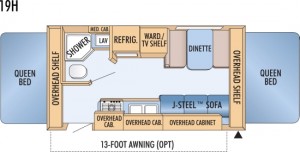 Imagine my surprise, then, when we received a call two weeks later from Hilltop telling us someone had just traded in a like-new version of the exact model (Jayco Feather 19H) we wanted!  Isn’t that what always happens when you have all the time in the world?

Outfitting – Does Clark get Christmas presents, too?

Planning the Trip – With Kids